An invitation to exhibit at Steklenik (http://www.steklenik.si/en/home/) resulted in a mid-November trip to Ljubljana. Steklenik, a partnership project of the Cona Institute (run by Brane Zorman and Irena Pivka; http://www.cona.si) and the University Botanic Gardens Ljubljana, is a sound gallery space, a greenhouse with an integrated 8-channel sound system.

I had been invited to install my 8-channel work No.2: “no trace”

which, in summary, presents two walks, each one upstream and downstream, along a common route, in a river; the two walks were made on the winter solstice and the spring equinox. I had been working towards preparing this for a few weeks in advance of travelling. The set up in the gallery is of four speakers along each side wall fixed to the metal ribs of the building and sitting above a waist high, one metre deep shelf that runs the length of each long side; there is a low island flower bed centrally placed on the floor and slightly closer to one end of the gallery; all surfaces are covered in plants, mainly cacti.

Whilst there were technical reasons (manageable but clunky) and practical reasons (the centre of the room was not accessible) why I wasn’t going to repeat the Cheeseburn Grange installation of an ambisonic diffusion, my overall reason was aesthetic. I wanted to produce more of a focus on the speakers, their individual outputs and the physical and conceptual distances between them.

I ended up with a composition that had a number of features: 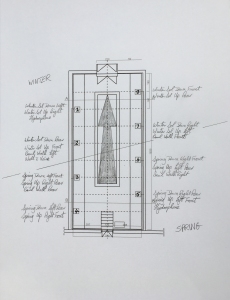 Having adjusted the gain – a general increase of about 5dB in response to a larger space than I had been editing the composition in and a setting that meant that whilst you could hear the work as an overall composition, you would hear more detail if you more closely approached individual speakers – the work offered ideas on walking, time and distance. The impact on my walking was described in the original exhibition catalogue essay (https://martinpeccles.com/sound-works/trace-no-trace/). In terms of time and distance then a listener could listen to and move between winter and spring as they walked between the two ends of the gallery, they could listen to the turn of the year, the change of the seasons. They could hear my progress along the river and match this to their own movement around the gallery, listening to my walking a mile as they walked the floor of the gallery. However, importantly, there was no single ‘sweet spot’ within the gallery where the work could be experienced; it was designed to be experienced by moving, by walking, by replicating my actions in creating it. Thus, each listener, with their own movement and listening, co-creates their own unique experience.

The composition opening was at midday on Saturday 16th November and I did a live performance at 19:00 on Tuesday 19th November …

I had a great time in Ljubljana – walking, recording, installing and performing – many thanks to Brane and Irena who were wonderful hosts.